Oil is the life blood of the engine, and as such should be monitored and changed at frequent intervals. Not only does oil keep all the moving parts lubricated and clean (it carries away small particles produced as products of combustion), it acts as a heat transfer medium to remove heat and transfer it to the cooling system. Without this lubrication, parts in contact would create massive amounts of heat from friction leading to failure of the parts.

The CX/GL engines work well on most types of oils, be it "dino oil" (refined petroleum products from crude oil) or fully synthetic oils. The important factor is to use only oil that does NOT contain anti-friction additives, as they will cause the clutch to slip in these wet clutch bikes. Since these engines can run well on both natural and synthetic oils, the type used can be as much about personal preference as price. The main thing is to make sure the oil is changed regularly to keep the engine clean and reduce part wear.

One oil that has become increasingly popular on this and other bike forums is [Rotella 15w-40]. It is a designed oil with zinc additives, but no friction modifiers to damage our wet clutches. A motorcycle oil from a bike shop would also be fine, but the cost will likely be much higher. 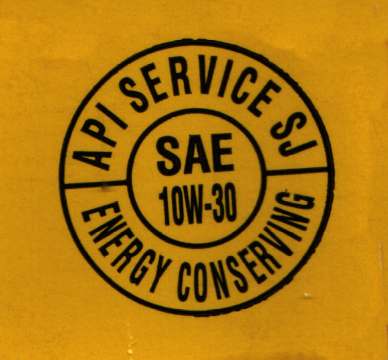 The JASO-MA rating designates oils that are compatible with a motorcycle's wet clutch. That rating will also be printed on the bottle:

While a user can change from natural oil to full synthetic without causing any harm to the engine, the oil should be monitored regularly after the change. One thing synthetic oil is very good at is breaking down and encapsulating old oil "gum," which can cause seal leaks in some cases. These leaks are NOT because the synthetic oil destroys the seals, but rather it removes old crud that could be encrusted around already bad seals, thus allowing the oil to start leaking. If the oil is monitored at a fairly regular basis, this gunk can be seen in the oil. A safe plan is to change the oil and filter after a short while (100-200 miles) when first switching to synthetic.

This again is something that is based on personal preference or dictated by the manufacturer’s recommendation. Since oil has come a very long way since these bikes (and manual recommendations) were made, the change interval should be based on very important factor, keeping the engine CLEAN. We have all seen that oil goes in clear and sometimes comes out black; these are the byproducts of combustion that the oil is capturing. Now, also remember that the oil circulates around the engine, and so where the oil goes the crud follows. If you keep an oil change schedule to make sure the oil goes in clean and comes out clean, your engine will last you a very long time.

While the interval of changing oil will vary based on personal preference as much as current oil "griminess," it is good practice to change the oil at the end of your riding season, especially if the bike is to sit dormant for an extended period. The main reason for this is that all of the suspended particles will precipitate out of the oil over time, and end up settling and "caking" to the engine. If the change is done just before "layup" then all of the particles will be removed and only clean oil sits during the layup. Another reason for seasonal changes is that byproducts of combustion can turn the oil acidic. Modern oils have buffer products in them to minimize this, but still, you don't want your bike sitting all winter with acid in the crankcase. Given the expense of a oil and filter change, most owners are opting to change in the 3000 mile range. Longer rides and stop and go rides can alter this number.

The oil filter is used to filter out (lock into its filter medium) large particles of products of combustion so they are not circulated back into the moving engine parts. As the filter does its job, the flow through it will gradually become restricted, making it harder for the pump to circulate the oil. The filter should be changed at least every other oil change, but many prefer at every oil change (especially if the oil has darkened).

Considering the cost of a filter weighed against the engine, it’s a small price for reliable operation and peace of mind.

Place the motorcycle on its center stand. Check the oil level with the filler cap dipstick after 2-3 minutes of run time. Do not screw in the cap when making this check. If the level is below the lower level mark on the dipstick, fill to the upper level mark with the recommended oil.